In honor of Women's History Month, we will be highlighting women who have played an important role in Waco ISD, the education field, or the community.

Ann Richards was born Dorothy Ann Willis on September 1, 1933, in Lacy Lakeview, Texas. She developed an interest in civic engagement and public speaking from a young age. As a student at Waco High School, where she graduated in 1950, Richards actively participated in the debate team and in the Girls State (and Nation) program where she practiced politics in a mock government. In the fall of 1950, she entered Baylor University on a debate scholarship (Wenger). After graduating from Baylor University in 1954, she earned a teaching certificate from the University of Texas. Her first job was teaching social studies and history at Fulmore Junior High School in Austin from 1955 to 1956. Richards said it was the hardest work she had ever done (Fogleman).

By the 1970s, Richards was an accomplished political worker. She spent much of her time volunteering for political campaigns and causes, especially those focusing on civil rights and economic justice. Richards officially entered politics in 1976, winning election to the Travis County Commissioners' Court. She was the first woman to serve as commissioner in the county's 136-year history. In 1982, she made history again when she was elected state treasurer, becoming the first woman to win a statewide office in Texas in half a century (Fogleman). In 1988, Richards was invited to be the keynote speaker at the Democratic National Convention. She introduced the nation to her sense of humor, with notable lines such as, “Buenas noches, mis amigos! I am delighted to be here with you this evening, because after listening to George Bush all these years, I figured you needed to know what a real Texas accent sounds like.” (The New York Times)

On Jan. 15, 1991, she was sworn in as the state's 45th governor - becoming the second woman governor of Texas and the first elected in her own right. As governor, Richards appointed more women and minorities to state positions than the previous two governors (Austin Public Library). The Texas Lottery was also instituted during her governorship. She advocated it as a means of supplementing school finances. The Texas Lottery launched May 29, 1992. At 6 a.m. that morning, Richards purchased the very first Texas Lottery scratch-off ticket at Polk's Feed Store in Oak Hill near Austin (Texas Lottery). Since its inception, the Texas Lottery has contributed $28.5 billion to the Foundation School Fund, which supports public education in Texas. (Texas Lottery)

Richards was defeated in the 1994 Texas gubernatorial election by George W. Bush. Shortly before leaving office in January 1995, Richards said “I did not want my tombstone to read, 'She kept a really clean house.' I think I'd like them to remember me by saying, 'She opened government to everyone.” (The Associated Press) Ann Richards died after a brief battle with esophageal cancer at her home in Austin on September 13, 2006 at the age of 73.

Thank you for opening the door for generations of women to follow in your footsteps in Texas politics, Ann Richards! 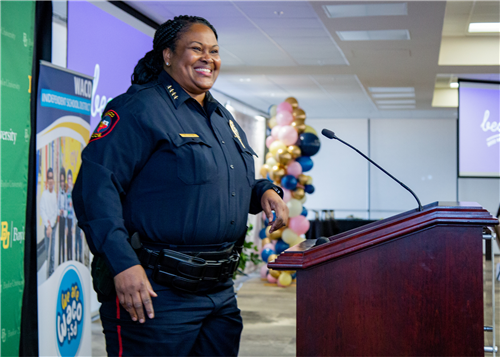 Chief Sheryl Victorian made history in March 2021 when she was sworn in as Waco Police Department's Police Chief. Not only was she the first female chief, she was also the first black police chief in Waco’s history. Dr. Susan Kincannon served on the selection committee and first met Chief Victorian via Zoom during the interview process. “I was impressed by her knowledge and experience as well as her ability to articulate a clear vision for the position,” said Dr. Kincannon. “She came across as a passionate and kind leader.” Now, she has officially been in command for a year as Waco Police Department’s 28th chief. “It speaks to the direction we want to go,” City of Waco Councilwoman Andrea Barefield said. “Personally, as a Black woman, we’re shattering glass all over the place and it can’t come at a better time for us to have more women of color in leadership positions, to create an opportunity for young people to be what they see” (Saegert).

Chief Victorian is a native Texan and a 28-year law enforcement professional. She has earned many awards and commendations for her service and dedication as a police professional and participated in several nationally recognized professional development and leadership programs. She holds a Bachelor of Science degree in Administration of Justice from Texas Southern University, a Master of Science Degree in Criminal Justice from the University of Houston – Downtown, and a Doctor of Philosophy Degree in Administration of Justice from Texas Southern University. Did we forget to mention she is also an adjunct professor at Southern New Hampshire University where she teaches Contemporary Issues in Criminal Justice, Ethics, and the Graduate Capstone course (City of Waco)?

Chief Victorian has always expressed that youth has a special place in her heart. She enjoys mentoring and teaching them. Being a role model for them is a position she doesn’t take lightly. “She possesses the five traits of a role model,” said Waco ISD Police Chief David Williams. “Passion and ability to inspire, clear set of values, commitment to community, selflessness and acceptance of others, and the ability to overcome obstacles. I personally feel that her commitment to the community is the strongest trait she possesses.” Her initiatives such as Back to School, Safe Start for a Safe Summer and the Trunk or Treat are just a few ways she provided students and community experiences to proactively interact with police officers. Most recently, Chief Victorian spoke to Waco ISD students at the Women’s Empowerment Summit hosted by the Junior League of Waco. She shared how she became a police officer, a detective, an assistant chief and chief. The students were inspired by her story and learned that she has been and continues to be focused on professional growth and learning.

Chief Victorian is also working to change the stigma of policing, a male-dominated industry. Currently, women make up only 12% of sworn officers and 3% of police leadership in the U.S. (30x30 Initiative). Chief Victorian is eternally grateful to those who paved the way. “They have gone through so much for me to be able to rise to the level that I have in policing,” she said (Jordan). She is now making sure she keeps paving for the next woman. "We are pledging to increase the number of females in our agency to 30 percent by the year 2030," Chief Victorian said. It's part of "The 30x30 Pledge" that the department signed back in April 2021 (Bates). The 30×30 Pledge is a series of no- or low-cost actions policing agencies can take to improve the representation and experiences of women in sworn positions in all ranks. Chief Victorian's department is currently made up of 15 percent females.

We are grateful to have such a strong leader in the community. Her commitment to Waco’s youth and women is why we are honored to showcase her this Women’s History Month.

In his report to the City Council, the Chairman of Waco’s Education Committee at the time stated “...we have committed the work to the hands of one who has a thorough knowledge of the details of our public school system…” By unanimous vote, they elected Mrs. Willie Durham House as superintendent in 1889. During her years of service, House was described as an untiring worker and a believer in thoroughness with her staff and students. She made sure to build well in every way on the foundations left by Mr. Jesse Newton Gallagher, the first full-time superintendent of Waco Public Schools (1886-1988). House faithfully served as superintendent until 1893. At the end of the decade from 1882 to 1892, House reported the schools had grown from an enrollment of 342 students to 2,791. School property worth was also reported to have doubled from her first year to her last year as Superintendent of Schools. House was appointed as the Principal of Central High School from 1893 to 1894. In 1894, she then became a teacher in the high school and remained there until she resigned in 1904.

House’s contribution to the education field did not end there. In fact, her focus was now on the city as a whole. Recognizing the lack of a public library, Isaac A. Goldstein joined with House to form a library association of concerned residents desiring to establish a privately run library. Shortly after, Waco’s first library was established. As more and more of the Waco community became interested in the library, space became an issue. Goldstein convinced philanthropist Andrew Carnegie to provide a Carnegie grant in partnership with the City of Waco. On November 28, 1904, the Carnegie Library, located at Twelfth Street and Austin Avenue, opened to the public. Goldstein declared the library ready to serve its purpose of assisting Waco’s teachers and guiding Waco’s children, bringing all of Waco “closer together for the highest and best purposes of pure and enlightened citizenship.” (Sawyer) House became the first full-time librarian of the new Waco Public Library.

When House retired in 1907, the Board of Trustees of Waco Public Schools wrote a letter of appreciation for her services as teacher, principal, and superintendent of schools. Above all, they complimented her on her contributions to the youth of Waco. More than 115 years later, her effect can still be seen today. It is extraordinary women like Mrs. Willie Durham House, who not only earned their place at the table, but pulled up chairs for the women after her. Today, we are lucky to call another strong woman our Superintendent of Schools, Dr. Susan Kincannon. She is one of many women in leadership roles in the education field today. Thank you, Mrs. Willie!