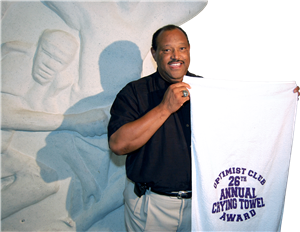 For more than 5 decades, LeRoy Coleman coached, taught, mentored, and shaped the lives of young student-athletes. He worked at Waco ISD for more than 30 years, beginning in 1977 as the head boys basketball coach for University High. In 1981 he became the Trojan’s head football coach and athletic coordinator where he served until 2008 and amassed a 141-137-9 record.

During those years, he met and married his wife Geraldine, and subsequently coached their two sons, Coby and Carl, when they were old enough to wear the purple and white uniform.

When he retired from Waco ISD he left University to pursue his hobby: football. He soon became the assistant football coach for the LaVega ISD football program alongside his close friend, Willie Williams. During the 14 years he coached at LaVega, Coleman coached in four state title games and helped the Pirates win two state championships.

In August 2008, Coleman was the recipient of the Dave Campbell Award. He was a member of the Texas High School Coaches Association, where he served on various advisory committees. Most recently, in September of 2021, Coach Coleman was inducted into the Waco ISD Athletic Hall of Fame.

Coleman’s success on the field may have been due to his hard work off the field. Described as a lifelong learner, he began his education in Temple, Texas. He earned his bachelor of science degree in physical education from Paul Quinn College in 1970, and a master’s degree in educational administration from Prairie View A&M University.

Coleman’s football record is unsurpassed at University High, earning him an undisputed place in the history books. In 1993, 1996, and 2002, the Trojans advanced in post-season play through multiple rounds in the playoffs.

However, history always leaves an untold narrative. And while the record books track the impressive scores, it’s the hearts of players and the memories they hold so dear that really count. Throughout his career, Coleman has mentored numerous young men, many of who went on to play college and professional football, including the Pro Football Hall of Famer and former University Trojan, LaDanian Tomlinson.

For those young men who knew him best, those student-athletes who he mentored, including his own sons, you could probably pull any Vince Lombardi quote out of a hat and they might just attribute it to Coach Coleman. For example:

“They call it coaching, but it is teaching. You do not just tell them…you show them the reasons,” or, “If you don't settle for anything less than your best, you will be amazed at what you can accomplish in your lives,” or, “There is no substitute for work.”

Last fall, prior to Coleman’s induction into the Waco ISD Athletic Hall of Fame, his son, Coby Coleman, said in the most profound statement to Waco Tribune-Herald reporter, Chad Conine, “I think more than ever we should give our loved ones flowers while they’re living, so to speak.”

For those unfortunate ones who did not have the privilege to meet or know Coach LeRoy Coleman during his 74 years on this earth, we are truly sorry. As a husband, father, and high school coach, his passing earlier this month was surely a loss for his family, both inherited and acquired.So, to Coach LeRoy Coleman, we thank you for the many lives you have coached, taught, mentored, and shaped…you have undoubtedly made a difference. You will live in our hearts forever. 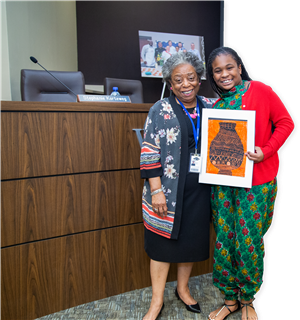 Some people may spend a lifetime trying to figure out how to invest their talents and interests in a positive and productive way. For Dr. Hazel Rowe, the decision to become an educator was easy and was more of a calling.

At the young age of 9, she quickly discovered how much she enjoyed teaching and working with children when her grandmother enlisted her to help teach a Sunday School class in their small town of Forney, Texas. Even though she was but a child herself, Rowe has never looked back and her career has spanned more than 5 decades.

Dr. Rowe is quick to credit the many teachers whose influence during her formative years served as a springboard for her future.

“I experienced great teachers,” she recalled. “My favorite teacher was my algebra teacher, who was motivational, inspirational, and extremely patient.”

“He mentored me and followed my personal and professional journey with great pride,” Rowe said of her former algebra teacher.

She began her teaching career in Clearfield, Utah, as a reading instructor for at-risk high school students and adults. One of her very first students was George Foreman, the heavyweight boxing champion.

When her late husband, Nathaniel, served in the Air Force during the Vietnam War, Rowe taught at McGuire Air Force Base in New Jersey. He was a Waco native, which is ultimately how she found her way to Central Texas.

In 2001, Rowe became an associate executive director at the Education Service Center Region 12 in Waco. After retiring from the service center ten years later, Dr. Rowe continued to train current and future educators, teaching in the doctoral program at the University of Mary-Hardin Baylor and in the alternative teacher certification program at McLennan Community College.

She is a founding and current board member of Transformation Waco, stepping aside from that position during her second term as interim superintendent for Waco ISD.

For most of her life, Dr. Hazel Rowe has invested her talents and interests in others, and for most of that time, the Waco community has greatly benefitted from her passionate work ethic. From a heavyweight boxing champion to a fourth-grader in Waco, Texas, it’s obvious that the sparkle in her eye and her love for teaching has helped to change many lives.

“Seeing former students become successful in their pursuits to achieve their goals and reach back to assist someone else gives me great joy,” she said.

And what advice would she give to her younger self?

“ Learn all you can. Love what you do. Treat others as you want to be treated!”

It's people like Ruth Jackson who keep the collective whole of a community in harmony through their unwavering dedication and resolute spirit.

Born and raised in Waco, Ms. Jackson has remained a Wacoan her entire life. When her father was stationed here through U.S. Air Force enlistment, her family tree was firmly planted in Central Texas soil.

As a gifted learner and a devoted student, she finished high school early when she graduated in 1962 at the age of 16. Her formative years at G.W. Carver High School served as the springboard for her professional career.

After high school, she attended Prairie View A&M University (PVAMU). She earned a Secretary of Science Certificate in business administration, which was equivalent to an associate degree at that time. With intermittent educational classes at McLennan Community College, she ultimately earned her degree in business management from PVAMU.

After college, she quickly entered the workforce in a full-time temporary position with the Department of Veterans Affairs, formerly the Veterans Administration (VA).

"While there, I learned that I would need to take the Civil Service Exam to continue on-going employment," Ms. Jackson recalled.

"So, I took the exam, passed it and, was hired as a full-time permanent employee in 1967."

She retired after a distinguished 35-year career with the VA, serving 30 years at the Waco VA and 5 years at the Temple VA.

Throughout her life, she has seen the city grow and progress. There is no doubt she has been a part of that progress with her drive, determination, and volunteer work in the community.

She has volunteered for the YMCA, served on its board of directors, and ultimately served as the board president. She currently serves on the finance committee for the YMCA of Central Texas.

Ms. Jackson also served on the Waco Regional Airport Advisory Board as both a member and chair. Most recently she completed a second 2-year term on the City of Waco's Tax Increment Financing (TIF) Board, serving as chair during her last year, which ended December 2021.

She is most recently using her leadership skills to help preserve, archive, and carefully curate the history of her high school alma mater. The school, which opened its doors in the LaVega school district in 1956, was closed in 1970 due to desegregation. Over the years, the campus has served a variety of purposes. In 2012, it became a Waco ISD middle school and remained open until 2021 when a fire gutted most of the building.

Thanks to the recent bond election passed by Waco voters (November 2021), the campus will soon be rebuilt. To help maintain the history of G.W. Carver High School through this transformation, Ms. Jackson serves as chair of the G.W. Carver Alumni Historical Committee, a group tasked with safeguarding the school's history for future generations. The committee has representation from each of the 14 classes that graduated from G.W. Carver High School during the years it was open, from 1956 to 1970.

What are her hopes for the future?

"I would like to see consistent focus and dedication toward maintaining equity for all students in Waco ISD." 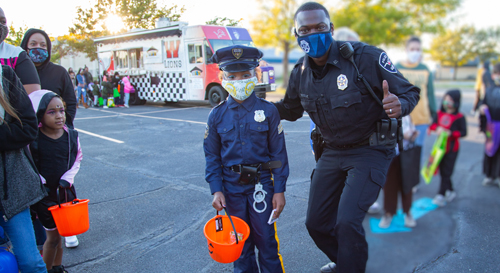 In honor of Black History Month, we will be highlighting a community member who has played an important role in Waco ISD and/or the education field. This week we recognize Officer Darius Brown.

When Darius Brown told his second grade teacher at Crestview Elementary he dreamed of becoming a criminal investigator, he wasn’t dreaming.

“I was inspired to work in law enforcement because I had a family member murdered and it made a huge impact on my family,” he recalled.

Fast forward to the present day and you’ll find the 2010 Waco ISD graduate serving the community as a positive presence in the Waco ISD Police Department. With 8 years of law enforcement experience under his badge, Officer Brown has won the hearts of hundreds as a Waco ISD Police Officer.

“I enjoy serving the students and staff of Waco ISD.”

He also mentors youth in East Waco through a program he started with his wife, Micah. They are the proud parents of a 1-year-old daughter named Justice.

In his spare time, Officer Brown enjoys going to church, traveling, and working out.

Advice he would give to his younger self? “I would encourage my younger self to DREAM BIG and NEVER GIVE UP!”