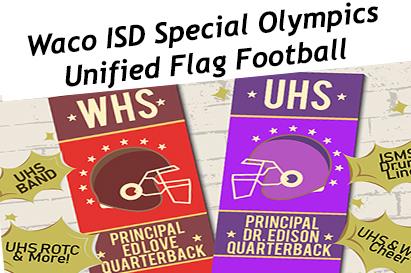 UPDATE:  Due to inclement weather and the possibility of freezing temperatures, the flag football game scheduled for Nov. 12 will be postponed.

While the district initially planned to move the event indoors in the event of inclement weather, the potential combination of wet roads and freezing temperatures this evening could lead to hazardous conditions when buses would be transporting students home after the game.

Waco ISD's First Annual Unified Flag Football game will be rescheduled for this spring. The date and time will be announced later this year.

Monday night, University High School and Waco High School will face off on the gridiron for the second time this year. This time, special education and general education students will be playing together on each school’s team with their principals as the quarterbacks.

Waco ISD and the Special Olympics Texas – Heart of Texas Area have partnered to host the First Annual Unified Flag Football Game on Monday night at the Waco ISD Stadium (1401 S. New Rd., Waco). Kickoff is set for 6:30 p.m., and admission is free.

“I’m excited that this flag football game will be a celebration of the many different dimensions of diversity in Waco ISD,” special education director Suzanne Hamilton said. “Students of varying abilities will be coming together to build camaraderie in a spirit of friendly competition.”

Waco High School Principal Ed Love will be suiting up as the quarterback of his school’s team. The Lions will be cheered on by the school’s cheerleaders, mascot and the Indian Spring Middle School drumline.

“This game is going to be every bit as exciting as any Friday night at the stadium,” Waco ISD health services coordinator and Special Olympics volunteer coordinator Rhiannon Settles said. “I want to invite everyone to come out and cheer on our students. If our community packs the stands, that will make it all the more special for our students.”

Last year, Dr. A. Marcus Nelson, superintendent, called for five bold changes as the foundation of a plan to transform Waco ISD. One of those was to enhance the district’s special programs, including special education, advanced academics, career and technical education, fine arts and athletics.

Strengthening the district’s partnership with Special Olympics has been part of that effort. Earlier this year, Waco ISD students and staff participated in several Special Olympics events, including a Super Hero Super Dance hosted by Baylor University and a Super Hero Super Run to raise money in support of programs for children and adult athletes with intellectual disabilities. More events are planned later this year.

“This partnership is important to us, because it’s so important to our students,” Dr. A. Marcus Nelson, superintendent, said. “Monday night’s unified flag football game is a great example of that. It’s an event that highlights the unique abilities of each of our students and promotes acceptance and inclusion for all. This really is going to be a fun event.”

In the event of inclement weather, the game will be moved to the main gym at University High School.