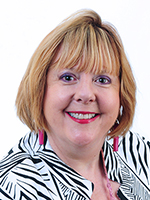 Lynn Callentine has been a bilingual/ESL teacher for 24 years.  “My first trip to Mexico, is what inspired me to become fluent in Spanish and work with the Hispanic community in Texas.  I went to an island in Mexico, with a friend who was fluent in Spanish. I saw the difference it makes in a traveling experience.  I loved the culture; food, music and especially the people.  I signed up for night classes in Spanish immediately upon my return and I always credit my skills and practice to the cooks and tortilla girls at Fonda San Miguel in Austin, Texas.  Every day I would practice trying to speak Spanish with them.  I’m sure they had a lot of laughs at my initial attempts.  My experiences abroad have made me more compassionate and understanding about different perspectives.”

Ms. Callentine took this same passion and decided to attend The University of Texas in Austin with a major in Spanish and Journalism.  Every year Lynn would travel to colonial towns in Mexico.  Students are surprised to learn that she’s visited their hometown of Queretaro, San Miguel de Allende, Zacatecas, Guanajuato, or Monterrey.  “I love Mexico.  I’ve also been to all the touristy Caribbean beaches; but there’s nothing like a pueblito.  Very charming.”

After graduating, Lynn worked at an advertising agency, but missed working with the Hispanic community; so, she got her teacher’s certificate and worked in Austin for nine years as a bilingual teacher.  She now has her Masters in Educational Administration from Tarleton.

Lynn then moved to the international school circuit.  She taught for five years in Dusseldorf, Germany where she learned to speak German and one year in Muscat, Oman.  Lynn reports that “many people don’t understand that the main language at international schools is English.  I worked with students and parents from 45 different countries.  It was important to understand the history and social protocol of the different cultures.  You also have to be a native English speaker to teach.  Teachers were from America, England, Scotland, Australia and New Zealand.  One day I walked into the teacher’s lounge and they were all discussing something and one pointed to me saying, “She’s American.  I bet she can do it.”  Sure enough, I was the only one from the group that could say the Pledge of Allegiance and could sing the National Anthem.

Lynn has many stories about her adventures in traveling and likes to weave them into her trainings on Sheltered Instruction and the ESL Academy.  She enjoys all the aspects of working in the Bilingual and ESL department.  She would like to attend the University of Guanajuato in the summer to improve her academic Spanish and take photography lessons at MCC or Baylor.  She loves her dogs, Sox and Cloe.  She also likes to paint with oils or watercolors.